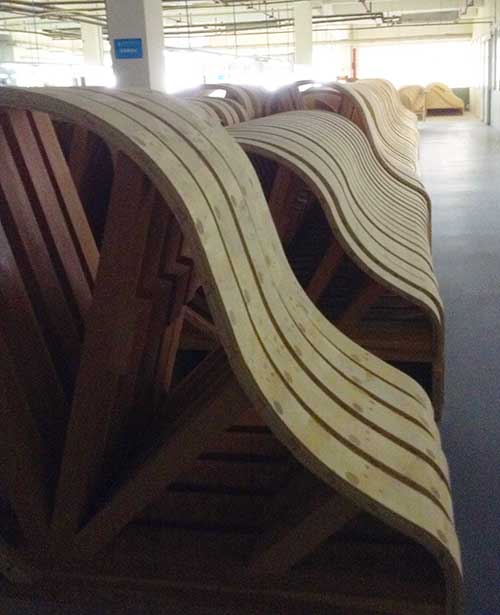 Close to where I live is a sea wall made of large concrete blocks that extends out into the ocean. It serves to protect boats coming and going into the harbor. At times, the waves crash up against the sea wall and at other times, the waves bounce gently and you can see the reflected waves carry out to sea. Whenever I see these waves, I am reminded of how similar these properties are to sound and light waves bouncing off of a more rigid, reflective surface. Today’s topic is the rim of the piano. The rim is the outer wooden frame surrounding the soundboard. Generally, it is thought of as a rigid, reflective surface to bounce the sound waves back again into the soundboard, similar to that of the sea wall. If you were to liken this to a drum, the skin would be the piano soundboard, freely oscillating and held firm at the perimeter by the drum rim and shell. But much of the character and the body of the tone come from the rim and the skin under compression. So too in piano manufacturing, the rim of the piano plays an important role in tonal character of the piano. Its significance then is vital and the philosophy of rim construction and materials vary from maker to maker. One philosophy of rim making is that it should be made of dense woods like beech or maple and act like the sea wall, reflecting again and again the sound waves back into the soundboard. Conversely, one could think of the rim as an extension of the tone wood of the soundboard, made out of spruce, vibrating in sync with the soundboard and transmitting sound waves itself. This difference in opinion also affects how rims are manufactured.

The Outer and Inner Rim 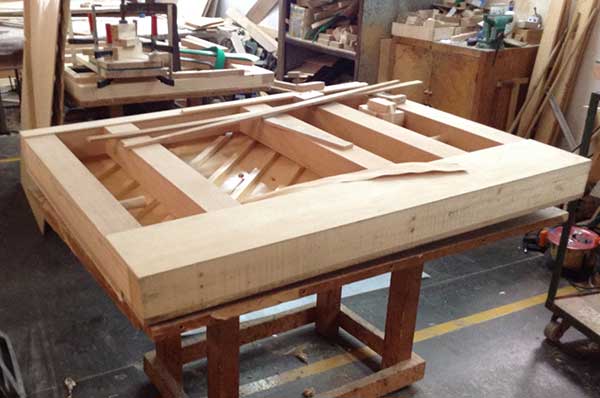 The outer rim encases the inner rim and soundboard and adds further reflection of the tone as well as becoming the outer cabinet of the piano. Grand piano rims and upright rims are manufactured completely different from one another due to their shape. The upright piano, being rectangle in shape doesn’t require special equipment in its formation. Its rim, then is rectangular with extra beams running vertically for structural support. The soundboard can be seen pictured here in between the posts with ribs running diagonally. The grand piano, however has the quintessential shape that is very rounded on one side, what is also known as the “bent side”. In order to bend wood into that shape, thick pieces of wood cannot be used as they would crack rather than bend under pressure. The rim is formed by gluing several thin layers of wood together to form the grand contour.

How Do They Get That Shape?

Grand piano rims are pressed into shape by bending glued strips of wood around a form. Due to the great resistance of the wood, thousands of pounds of pressure are required for this process. Believe it or not, these grand rim strips can measure upwards of 25 feet or more (11m) prior to bending them into shape. On a long flat table, the strips of wood are laid down, one after the other with glue in between. Successive strips are laid down until the appropriate thickness is achieved. Quite often maple or beech are used as the wood of choice as it withstands the pressure of bending, holds its shape after the bend and acts as an excellent wood for reflection.

Choice of wood, thickness and grain orientation vary from maker to maker, model to model. With boards that can reach 20+ feet long and filled with glue, they can weigh upwards of a hundred pounds or more. The slats are then lifted onto the form which are specific to each model. Since each grand piano size has its own length and specific shape, the form for each model is different as well. Grand presses require thousands of pounds of pressure to form the rim and while most of the larger manufacturers have automated this with the use of hydraulic presses, traditionally 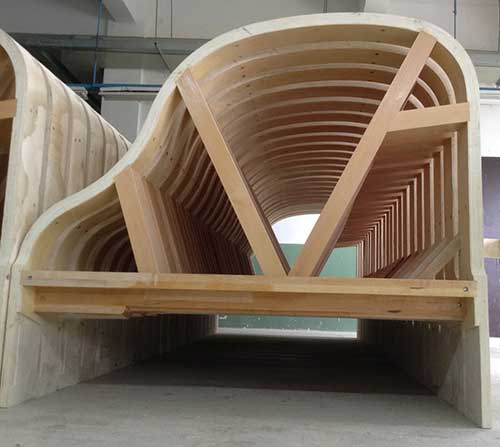 rims were formed by hand with closely positioned clamps around the form. All of this needs to be done in a timely manner before the glue has a chance to set up. Once the rim is in shape, some factories also make use of low current voltage to aid in the glue curing process. Rims then usually sit in the form for 24 hours after which they enter a period of resting to allow the wood to accept the new shape and return to optimal moisture content. This can take several weeks. After resting, the rims are then ready for framework. Structural wooden beams are joined to the rim to provide support, often in a lattice or radiated fashion. In the article calculating string tension we learned that there are 19 to 30 tons of string tension applied to the piano frame. The cast iron plate provides rigidity on the top side of the soundboard while the beams under the soundboard provide strength along the rim. Once the rim and beams are joined, it can then be ‘notched’. Small grooves are chiseled into the rim to accommodate soundboard ribs. The soundboard is then glued perpendicular to the rim. The rim and the soundboard then act as one ~ the soundboard vibrates freely from the strings while the rim reflects the sound waves, like the sea wall back into the soundboard for further vibration.

If there’s ever a case for “more is better” in a piano this is it; a thick rim and thick beams create a firm foundation and less loss in energy. Like the sea wall, when the waves crash up against it, the harder the surface, the more energy gets reflected. Lossless energy means more transmission to the soundboard with potentially more projection and sustain of tone. Like other aspects of piano research, the rim cannot be isolated but if you’re researching pianos, reputable piano companies will offer information about their rims, beams and materials they’re made from. I also appreciate the quality of craftsmanship when beams are perfectly fitted because I value the expertise to make either dovetail or mortise and tenon joints rather than having parts simply screwed together. When I visited the historic keyboard museum in Vienna, Austria, I found it interesting (and logical) that many of the founding piano manufacturers had their roots as cabinet makers. Truly, if we are to make music at the piano, we also cannot separate artisanal craftsmanship at the foundational level of manufacturing.