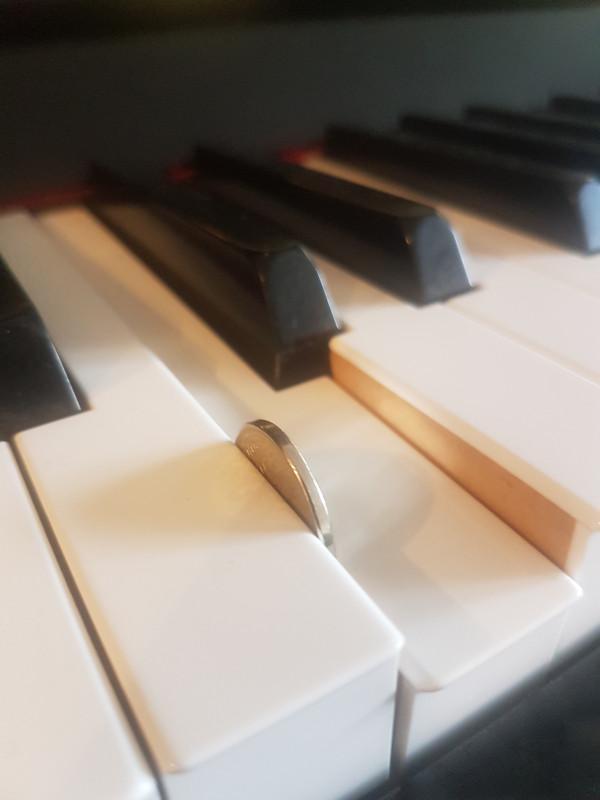 Aside from tuning the piano, there’s one question that gets asked more than any other. “Can you fix a sticking key?” The term ‘sticking key’ refers to a mechanical failure where a piano key is depressed and it doesn’t return to its normal position in a timely manner. It can happen on new pianos and old pianos alike and today we’re going to examine the main reason why piano keys stick.

F stands for Friction
The vast majority of the problems with a sticky piano key come from unwanted friction. That friction shows up in four forms: blockages, wood swelling, joint corrosion, or rubbing. The rare exceptions to this come from broken parts but they account for a very minor percentage of sticking keys. So let’s look at each of these areas briefly.

Blockages
This is the first go-to when diagnosing sticking keys. Piano actions are made up of over 4,000 parts and you would not believe the things that get stuck in between piano parts to make a piano key misfire. Common foreign objects include coins, guitar picks, paper clips (usually from sheet music), eraser shavings (usually from composers or students writing music at the piano and scribbling out changes), kid’s toys, playing cards and rubber bands. The theme here is that all of these objects are thin but get hung up in between the keys. When asked recently about what to do when someone’s kid dropped something inside the piano, I said the solution is easy… “get different kids”, I replied. Unfortunately, they didn’t have the same sense of humor.
The aforementioned blockages speak to the piano key sticks (the black and white keys) but what about inside the piano? The complex system of levers inside the piano known as the whippen assembly can also have blockages. 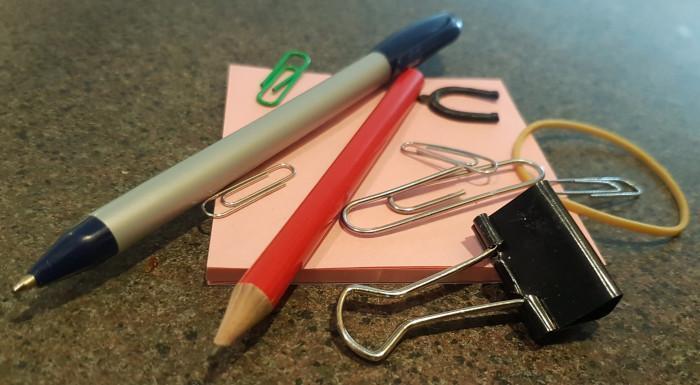 Foreign objects can also get lodged in those parts as well. The number one unwanted object found inside the piano (drum roll please)… pencils and pens. I’m unsure how other objects get lodged in the piano but I’ve seen food, Christmas decorations and sticky notes. When I was young, I thought that any object that went into the piano was like a black hole, never to be seen again. FYI, foreign objects don’t evaporate! They’re still there and sometimes prevent the piano from operating normally.
Cause: Foreign objects block normal piano key movement
Effect: Piano keys will often stay in the down position.
Fix: Sometimes holding one piano key down and moving the adjacent key will help the coin or paperclip to drop through the keys… if you’re lucky. Otherwise, trust a piano technician to remove the unwanted object. 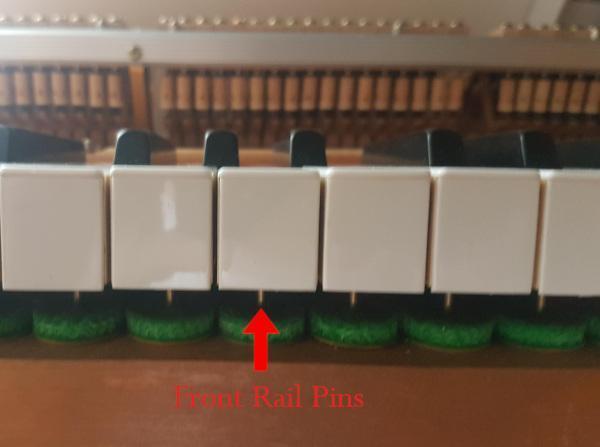 Wood Swelling
The bulk of piano manufacturers utilize wooden action parts. This has been the material of choice since the inception of the piano. While wood is an excellent choice for machining, flexibility and tone, it also comes with the inherent property of being susceptible to humidity change. As the wood absorbs humidity, it swells slightly and can cause a piano key to stick. Humidity control is a very real concern for piano manufacturing shipping pianos globally to various environmental conditions. Wood swelling most often (but not exclusively) shows up in the key stick itself. The key stick has two metal guide pins that accurately position the piano key for up and down travel. The key stick has two slotted holes lined with key bushing cloth to create an exact amount of friction but also reduce noise between wood and metal. But what happens if the wood swells? 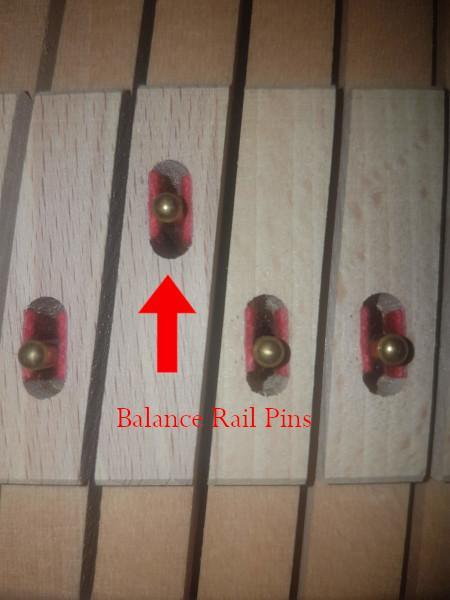 If the wood swells from humidity, the wood then crowds the guide pin and the key won’t travel properly. If you have a key that sticks from humidity, the wood simply needs to be “eased” to the correct amount of friction. This can also happen from liquid being spilled on the piano.
Cause: Excessive humidity
Effect: Individual keys seem sluggish, heavy or not return at all to resting position
Fix: Have a piano technician correct the friction with easing pliers. It’s a straight forward fix.

Corrosion
The third causation of sticking keys comes from corrosion. While this corrosion is most often barely visible to the naked eye, it causes joints to slow down or feel like there’s excessive weight when pushing down the keys. Pianos have several joints per note called flanges (usually between 3 and 5 per note). 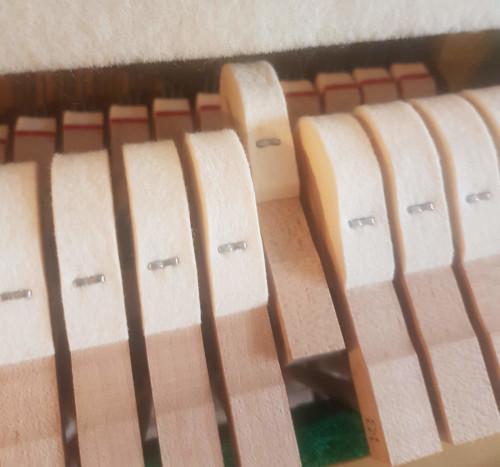 Each joint hinges on a metal center pin surrounded by cloth, inserted into the wood. Some friction is actually required in pianos but if the center pin becomes slightly corroded, it causes undue friction to occur. Stiff touch will result and the hammers will be slow to return. If you open up the top lid of the piano and you see a hammer that is ‘stuck’ in the half-way position or is slowly returning, it’s most likely in need of a new center pin.
Cause: Corrosion on the center pins. Sometimes the key will pop back up but the hammer won’t repeat.
Effect: Slow hammer or repetition lever reset. Heavy touch is sometimes the result of excessive friction.
Fix: Have a piano technician remove the existing pin, reem out the felt and replace the center pin with a new one

Rubbing
With over 4000 moving parts in a piano action, there is a distinct possibility of two adjacent parts rubbing together. It doesn’t take rocket science to know that a key will misfire if two parts are rubbing together.
Cause: Parts that are too closely spaced together
Effect: Two adjacent notes will have parts rubbing. Sometimes only one note is affected but often 2 notes side by each will misfire.
Fix: Have a piano technician correctly space out the parts so that they aren’t touching

Broken Parts
Although less common, there are times when a part has become unglued or broken and is preventing the note from working properly. If it’s a glue joint that has come undone, that can be remedied fairly simply. If it’s a hammer shank that has broken and you look down inside the piano and the hammer is no longer positioned where it should be, it could be a more involved fix. Often parts like these need to be worked on in a shop. They involve tools like a drill press to accurately remove old parts. Clamps and saws are also needed. The key stick can also break with excessive force. Creative thinking must be done around how to fix the key.
Cause: Broken shanks or keys
Effect: Malfunctioning note
Fix: These vary depending on the cause.

Final thoughts: If you have a sticking key or two, don’t be afraid. Everything can be fixed. Call your local piano technician to discuss the necessary key fix. One thing that is very helpful – take note of the offending keys to save time during your next piano check-up. Murphy’s law, when the piano technician arrives, the note will be working properly. If you make note to which keys are misfiring, they will at some point need further investigation and fixing. Nothing is better than a smooth playing piano and that means, making sure each of your 88 keys is working correctly.