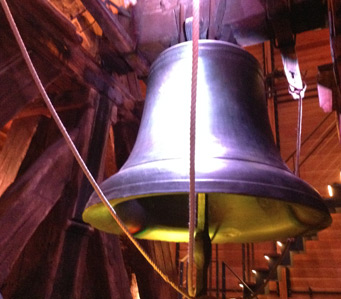 I walk up the stairs of the bell tower in the town of Hradec Králové (“City of the Queen”). The stone steps are worn because many have visited this monument built nearly 450 years ago. Massive beams are used to support the bell that appears to be about 5 feet tall. I think about the challenge of building a tower out of stone and then raising this 8 ton bell to a height of almost 200 feet without modern equipment. I’m sometimes baffled by the human spirit. It must’ve been a struggle to survive back then in everyday life. But what is more interesting to me is that there’s this determination not only to survive, but to build objects of beauty and to express creatively despite seemingly monumental obstacles. Such is the case also with PETROF pianos. Located in the same town, PETROF has been building pianos since 1864. When you think about building pianos back then – milling trees into lumber, casting iron, making thousands of intricate action parts by hand without modern tools, I must say I’m amazed at the human spirit again to feel compelled to build instruments of such rare beauty.
Today PETROF is very different. It quickly becomes apparent that PETROF, the largest European piano manufacturer, is this wonderful mixture of old-world charm and state-of-the-art advancements. Their facilities replicate their ideas. Out of these rough cut stones of old buildings come polished diamonds of beauty – transformations of wood and iron into dazzling pianos that are not only aesthetically pleasing but musically beautiful and expressive. 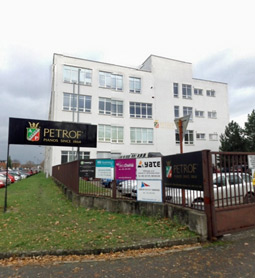 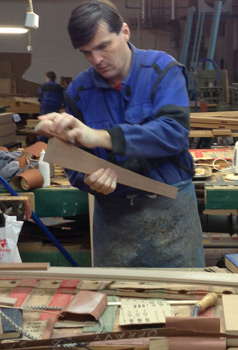 I started the tour in the milling room where they cut wood into usable lengths and sizes. Adjacent to that is their cabinet making shop. It brings a smile to my face when I smell sawdust. I enjoy wood shops. The mixture of rugged machinery from yesteryear is situated right beside sleek computerized lathes which are accurately notching and drilling piano cabinets. My absolute favourite room in the whole factory though was the next area where grand rims are pressed together. Two workers were preparing layers of the rim as well as beautiful veneers by hand but again, this massive press of brute force joins the layers of the rim together. Without seeing the magnitude of the machine in person, it’s hard to grasp. It looks like it weighs about the same as a tank! 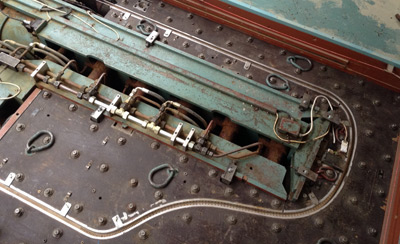 Thousands of pounds of pressure are used to push the grand rims efficiently and effortlessly together. The technical savvy to build the machine is staggering to me let alone the grand rims that come out of it. 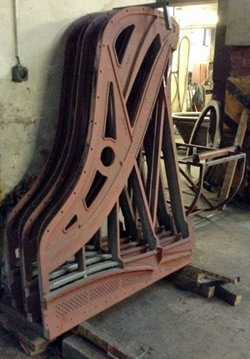 Moving to the metal shop, we see the cast frames being sanded and finished, again by hand. If you’ve ever been in a machine shop, this smells identical. Concrete and brick with metal filings give this room such a distinct feel. Here the wet sand cast plates are prepared to be sprayed smooth with gold.
We then moved to the assembly area and that’s when I noticed that each station seems comfortable. 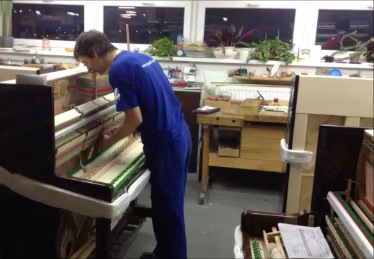 I was just not expecting to see greenery in the piano factory. Each of the assembly stations has been personalized by the workers. So at each station I saw something different that reflected the workers who go there every day – I saw plants, lots of pictures of their kids, memorabilia and collectables, pictures of cars and even sporting events. To others, the inspiration was not visual but audible. Some areas had obvious Czech cultural music playing while other areas were playing popular songs on the radio. Does this detract from the professionalism of the company? Absolutely not. Conversely, I find it telling that many of the workers have made piano manufacturing their vocation and have stayed for years. It speaks volumes to me about employee satisfaction. And with longevity comes proficiency. 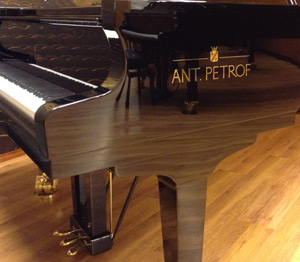 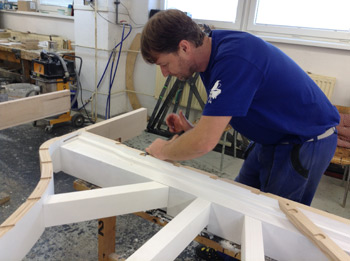 According to Jan Prostředník, the production manager, he said ‘we actually have people who have been working here for decades. We even have some married couples or other sons and daughters that have joined operations here as well”. So in the midst of the work at PETROF, there’s also a sense of family. I respect that. How I digress.
Back to piano making: It’s interesting to me how companies who have been making a product for the last 150 years choose to modernize some aspects of manufacturing and yet retain other areas by hand. For example, ten years ago, they installed a giant computerized buffing machine to make their finishes PERFECT. And I mean mirror finish. Yet when it comes to things like intuition – feeling how the keys respond as the new bushings are being tested for friction, it’s hands-on labour. There’s no replacement for intuition. Again, there’s a machine that plays keys repetitively hundreds of times (or possibly even thousands) to break in or settle the piano but when it comes to voicing – listening to the newly installed voice of each hammer, it’s all done one note at a time. And just watching the master carver with beautiful chisels carve decorative panels is absolutely fascinating to me. 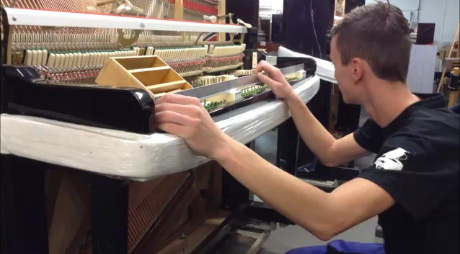 Stepping into the furthest reaches of technology, PETROF is very sophisticated. Aside from computerized advancements in manufacturing, PETROF physically models and designs pianos through software called “Menzurix”. How does it work? Well pianos all have strings of various lengths correct? Low notes have really long strings while the top notes in any piano are really short. How do you know what thickness or gauge of wire to use on any note?

This is where the Menzurix software comes in. Providing the length you require and then typing in a hypothetical gauge of wire, it will mathematically compute and graph out the potential sound for that string. Rather than installing one string after another and listening, the engineers at PETROF can mathematically compute and optimize the strings before a single wire goes into the piano. This is cutting edge technology. PETROF can pre-determine body of the tone and harmonics. But it doesn’t stop there. PETROF also has a very large an-echoic chamber (meaning there is almost no echo in this room. You can almost hear your own heart beat it’s so close). 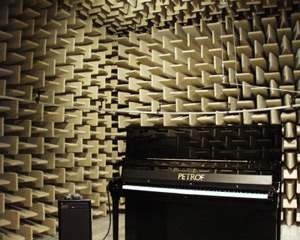 It’s large enough to house a grand piano and test their results. Also in the facility is a Feutron machine. The Feutron tests materials that go into a piano and pushes the envelope for both temperature and humidity. According to Jan Prostředník, every substance from glues, adhesives to finishes get tested at extreme temperatures and humidity. Practically what does this mean? It means that if they’ve tested materials in such an extreme way, there’s very little chance of it going wrong elsewhere in the world. They know all of their materials and how they will react. That translates into confidence knowing that they’ve done environmental “stress tests” with everything that goes into the instrument.
But what about the music? Ahhhh this is the enjoyable part. At PETROF you see almost every stage of construction. (Everything is made locally with the exception of German Renner actions and German hammers). Everything comes together in this one factory and when you finally put your fingers on the keys, it translates into the most wonderful tone. Their pianos truly feel like an extension of your fingers. The keys are responsive and quick, and the tone contains a gradual crossover from soft and felty with a tinge of sparkle to bold brazen power. 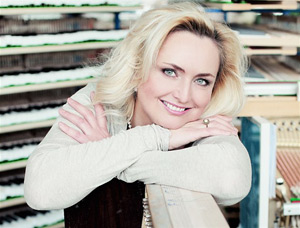 At the end of the tour, I had the wonderful opportunity to meet Zuzana Petrofova (English ~ Susana Petrof). What a delight to meet a living legend – CEO of this company 5 generations later! That evening we drove through the town and passed the old bell tower. Across the street from this church is the family PETROF home. As central as PETROF is to this town, I believe musically, they have become central to the world stage over the last 150 years and I suspect will continue to strive to build pianos of excellence and serve the musical community at large.