A Voice from the Past
“Step right up… See the amazing piano that plays by itself!” I can just hear the man at a trade show in the 1920’s. “Just push the pedals and this paper roll will play songs like Swanee and The Entertainer and Bicycle Built for Two.”

This invention in the late 1800’s was quite remarkable. It functions similarly to a harmonica in reverse. Rather than blowing through holes in a harmonica, the player piano sucks air through a perforated tracker bar. The paper roll has a punch-out hole position for every note on the piano. Through the use of bellows and gears, the paper roll would mechanically slide over the tracker bar and when a hole would appear in the paper, air would get sent through a tube and pneumatically play the corresponding note.

While this system allowed you to hear your favourite songs, the cons far outweighed the pros: the player pianos with the extra mechanical gears and bellows were heavy, complex, required you to pump the bellows (which was quite a work out) and after every song you need to change the paper roll.

Fast forward to the 21st century, player piano systems are light-weight, simple to operate and have produced many new ideas lending themselves to new directions in education, communication and entertainment. New player pianos operate very different: Instead of bellows there are solenoids – small electronic “pistons” that operate each key. Instead of paper piano rolls, the information is simply a digital signal in the form of a file. Rather than large mechanical gears and machinery, the newest player systems are tiny and almost invisible.

This technology is not new. It’s been around for 30 years.

But what has changed in recent years is the implementation of this technology. Now take those same electronic components and plug them into the internet. What are the possibilities of a player piano within the constructs of today’s technology?

Dream a little with me for a moment about the possibilities of today’s player piano systems. Want to watch a piano concert on your big screen TV? Well now you can synchronize the concert with your living room piano so that it will play exactly what the performer is playing on stage. Take a look at the video. It’s like having the performer play the notes on the piano right in front of you.

New apps are coming out as well. Yamaha has made an incredibly easy record and play app which is set to be released in March of this year. Pianodisc has re-vamped their app for easy organization and storage of music.

But wait, there’s more… The educational component now exists where you can have a teacher on one end of the country and a student at the other end giving lessons. Imagine having 2 pianos connected so that when the student or plays, the other piano resounds halfway around the world simultaneously.

Imagine the connectivity when grandparents and grandchildren can listen and connect through a player piano system.

Yamaha has also come out with MusicCast – a way to broadcast the sound throughout the entire house for complete media implementation. Let’s say you have one of their Disklavier pianos and would like to hear the music outside on the patio. With MusicCast, you can now broadcast that signal anywhere in your house and have independent control of volume.

Someone asked me recently, “Why would you ever want one of those? You already know how to play the piano.” My answer is simple – I thoroughly enjoy listening to others play the piano. At times I tire of my own playing and it’s like a breath of fresh air not only hearing but seeing the keys move from someone else’s playing. I also love the idea of the historical component. Steinway was playing vintage music from archives of Gershwin when I was at the NAMM show. It’s like stepping back in time and rather than simply hearing a bad recording from the 1920’s of Gershwin playing, you can hear the recording like the day it was recorded except on your own piano.

To end off, I have to tell you about an elderly friend of mine who has never been formally trained at the piano. He’s a great player and one day he told me that his teacher was none other than the paper piano rolls. As a child he would place his fingers over the keys that were going up and down from the player piano. Although some may consider this a teaching hack, he would rewind it and repeat it until he copied the song. As Oscar Wilde wrote, “Imitation is the highest form of flattery.” 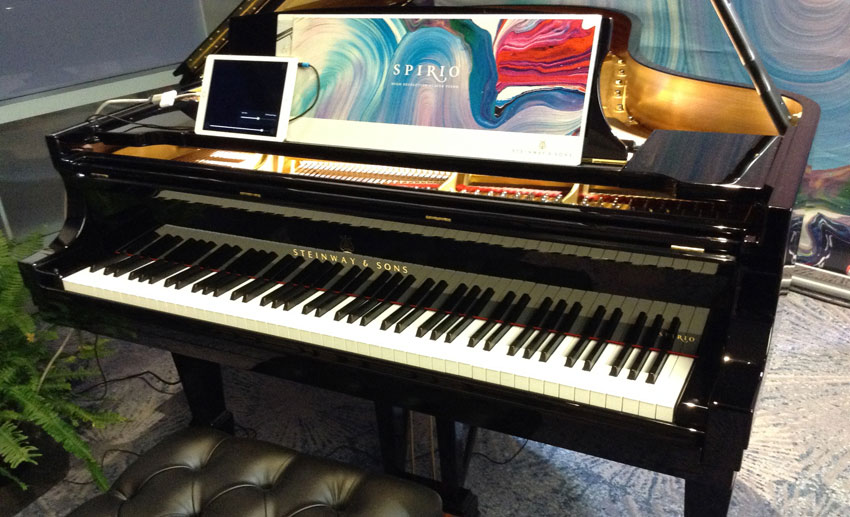 Whether learning by rote, watching a televised concert in sync with your piano, listening to the radio or playing and recording yourself, the new generation of player pianos offer and even broader scope for the enjoyment of the piano. While there are 4 innovators in piano player technology (Disklavier by Yamaha, QRS by Story & Clark, Pianodisc by Mason & Hamlin, Spirio by Steinway), there are many other player systems being designed and built by several companies as add-ons to uprights and grand pianos. While prices are considerable for current technology, I believe that with time these will become more affordable and attainable so that many can enjoy the integration of a piano being played more often in the home environment.