Recently, silent or quiet pianos have become more prevalent in piano manufacturing. In fact, in our Virtual Piano Trade Show, it seemed that silencer systems were a very popular theme this last year. What are these pianos they call “silent”? It sounds paradoxical doesn’t it? Why make a piano that you can’t hear? And why are they making the headlines in piano manufacturing? First of all, let’s take a look at what a silent piano is comprised of. But before we do that, let’s clear up some definitions of piano types:
Traditional pianos have hammers, strings, soundboards and cast iron frames. Piano tuners need to tune and maintain these pianos. These are also called Acoustic pianos. Some people simply call them Real pianos.
Player pianos are traditional pianos with mechanisms installed so that they can play songs by themselves. The keys move on their own and with the touch of a button from any phone or tablet, the piano will play all by itself.
Digital pianos contain no traditional elements. They often have weighted keys to simulate piano touch but they don’t completely replicate the feel. The internal tone is a recording of a real piano called a sample. It gets amplified via speakers.
Hybrid pianos are digital pianos with real piano actions (internal lever mechanisms). This bridges the gap in terms of feel. These are fully digital inside and the tone still comes out of speakers but the touch much more closely resembles a traditional piano.
Silent or Quiet pianos are traditional pianos that contain added features of sensors so that the piano may be played using headphones.

If you open up a silent piano, there is little evidence of it being any different from a traditional piano. Silent pianos have strings, tuning pins, hammers and a traditional piano mechanism called the action inside. Upon closer inspection, however, there are a few wires and you notice that the mute rail is slightly modified. 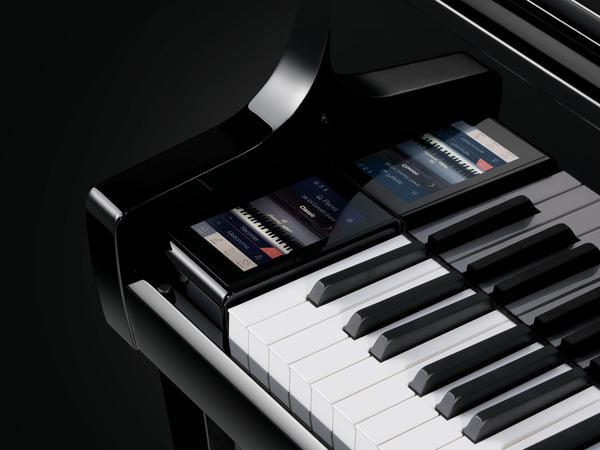 The middle pedal on most upright pianos is called a “Mute” pedal that cloth rail when activated places a piece of felt between the hammers and the strings. Effectively it mutes the strike of the hammers as this felt acts as a buffer to the blow of the hammer. In a silent piano, however, there is no felt rail. Rather, there is a hammer “stop” rail. When the middle pedal of a silent piano is depressed, the stop rail is lowered and prevents hammers from striking the strings altogether rendering the piano silent. Now having said that, pianos are never actually silent. When a key on the piano is pressed, the whippen assembly moves and lifts the hammer to strike against the strings. If the middle stop rail is engaged, the hammer will stop short of hitting the strings. The subsequent sound is simply a slight, dull knock of the hammer shank. Beneath the keys on a quiet piano, are optical sensors. There’s one for every note. They sense when a note is not only being played but also calibrated to determine the dynamic volume level of the key. 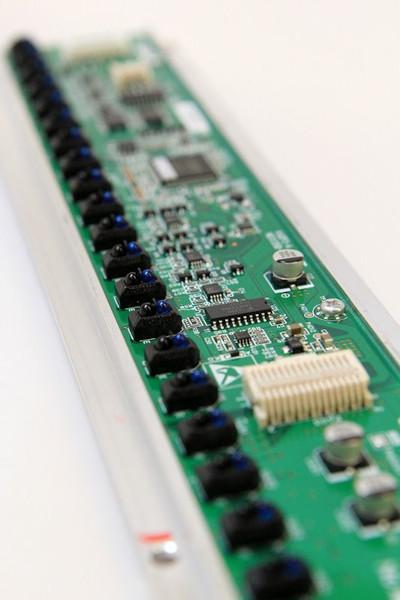 A small computer then translates the data – it captures the MIDI information of the notes that are pressed on the keyboard. In real time, the connected sound module would then play the corresponding piano tones of the notes played. A collection of piano tones is called a piano sample. When you play a note on the silent piano, the sensors detect the key and volume, find the appropriate piano sound and allow you to listen to it within imperceptible time loss of only a few milliseconds and hear it through headphones.

What’s the advantage of Silent Pianos?
1. With the emergence of higher density housing, silent pianos enable the performer to control volume and play privately through the use of headphones. The subtle action noise is all that can be heard.
2. Since MIDI information is captured with silent pianos, that means they can be connected to other devices: Connect to a computer to record a performance. Connect to a sound module to play different types of sounds like strings, or bells. Connect to educational software and it will correct your notes and timing. Connect it to chord recognition software and you can control a one-man-band.
3. It gives the performer all of the attributes of a real piano and all of the features of a digital piano. Rather than having both a piano and a keyboard, you can consolidate two instruments into one. Let’s face it – digital pianos are limited. There have been many complaints over the years of how keyboards or weighted-key digital pianos don’t feel the same as a real piano. Silent pianos solve all of that. You get real touch and digital piano features. 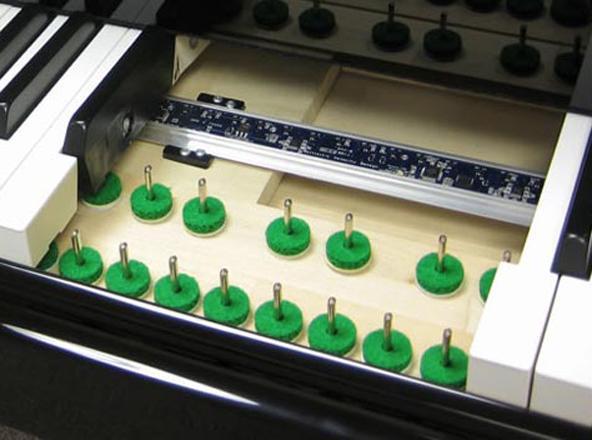 QRS sensors under the piano keys


Kawai calls theirs the Anytime Piano.

Samick has incorporated their silent Dream system. Feurich makes Real Touch Silencer System. There are also aftermarket systems made by QRS and PianoDisc.
QRS is associated with Story & Clark pianos.

PianoDisc is part of Mason & Hamlin.

Both of these companies fit their systems to their pianos but kits can also be purchased and added retroactively to almost any piano. Other independent silent retrofit systems include Genio, Bolan and Kioshi.

Whether you want to play piano in the middle of the night, record your performances into your computer or teach yourself to play piano, silent piano features add functionality to your piano. With retrofit options available, if you already own a piano, you can retrofit it with silencer features. It consolidates digital piano features and acoustic into one, illiminating the need to have both. It allows you, the performer, all of the advantages of a traditional piano touch with all the benefits of the latest technology.