I suspect in the year 2020, we’re going to be hearing a lot of the phrase “Hindsight is 20/20”. Looking back on the last decade, a lot has changed in the world of piano manufacturing since I started attending the NAMM show (National Association of Music Merchants). While many could argue that pianos don’t really change from year to year, if you pay attention, you’ll find that they’ve changed drastically this last decade. Parts have been refined, scale designs have become smoother, actions feel more succinct and cabinets, streamlined. 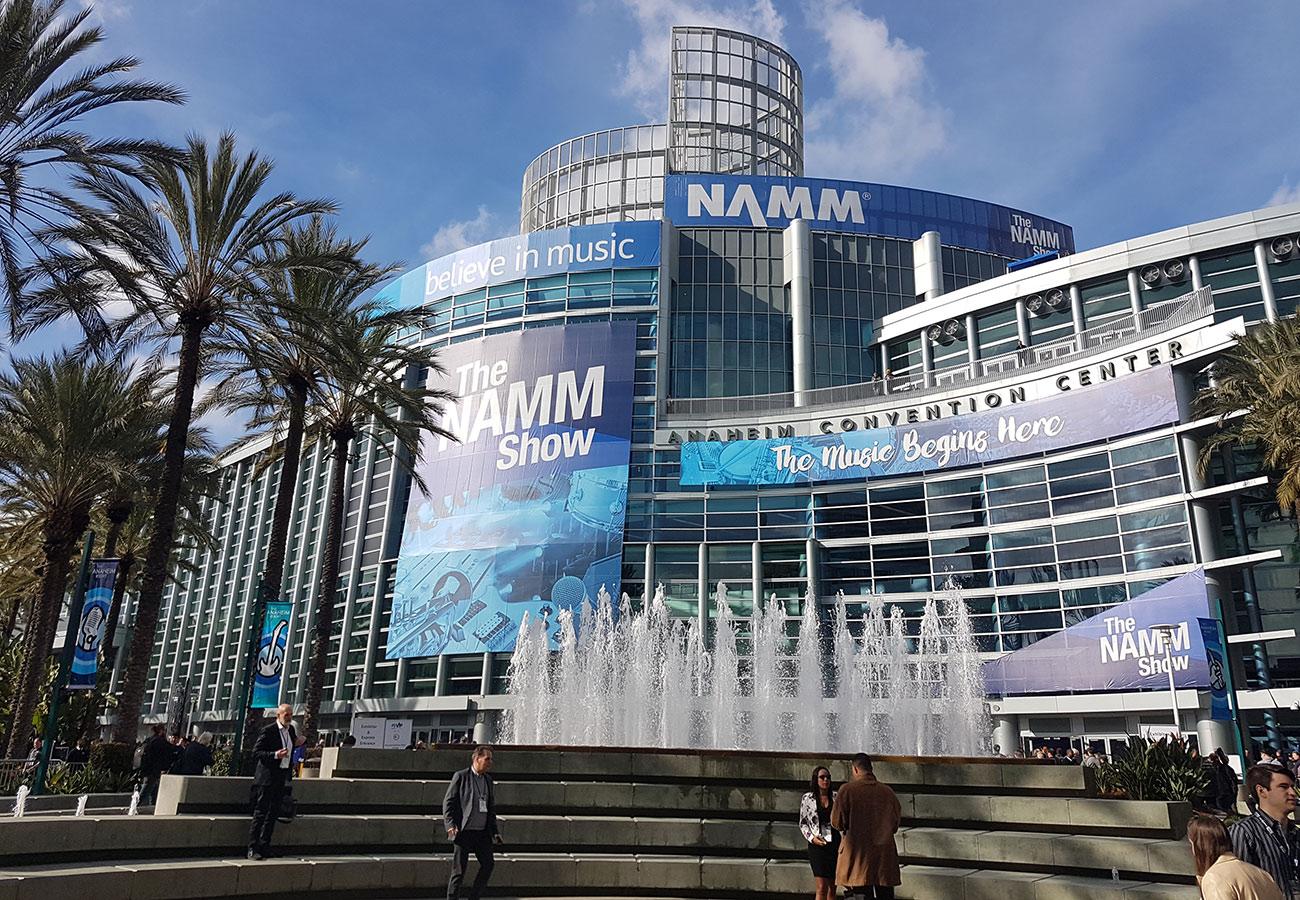 The NAMM show has always been a place for displaying new models of pianos. It’s exciting to see the artistic ventures of some of the more exotic pianos. This year at the show, Bösendorfer unveiled its “Secession” piano based on the Art Nouveau building under the same name located in Vienna, Austria. The Lang Lang “Black Diamond” piano from the Steinway Vault that was featured recently on Piano Price Point was also on display. When it comes to art case pianos, cameras just don’t do justice to the beauty of these instruments. Designed together by Lang Lang and Dakota Jackson, this piano is not only visually stunning but lovely to play as well. (Click on the photos above to view more images)
This year, both Pearl River/Ritmuller as well as Samick/Seiler/Pramberger came out with new color cabinet designs. They not only ventured into new bold colors but also unveiled many beveled edge and 2 tone options. I feel that these designs are a welcome change and some of the more subtle insets will work well for those looking for interior design ideas. Pearl River also displayed their white and plexiglass grand piano with plexiglass legs while their partner Schimmel displayed an incredibly flat black upright. While the satin hand-rubbed finish in black has been available for decades, the ultra lowest-lustre ‘flat’ finish has only recently become more available. Geb. Schulz also had an interesting take on an upright piano of what could only be described as slats, also finished in low lustre. It’s rather interesting and in the right setting would fit into modern décor. (Click on above thumbnail pictures for full screen images) 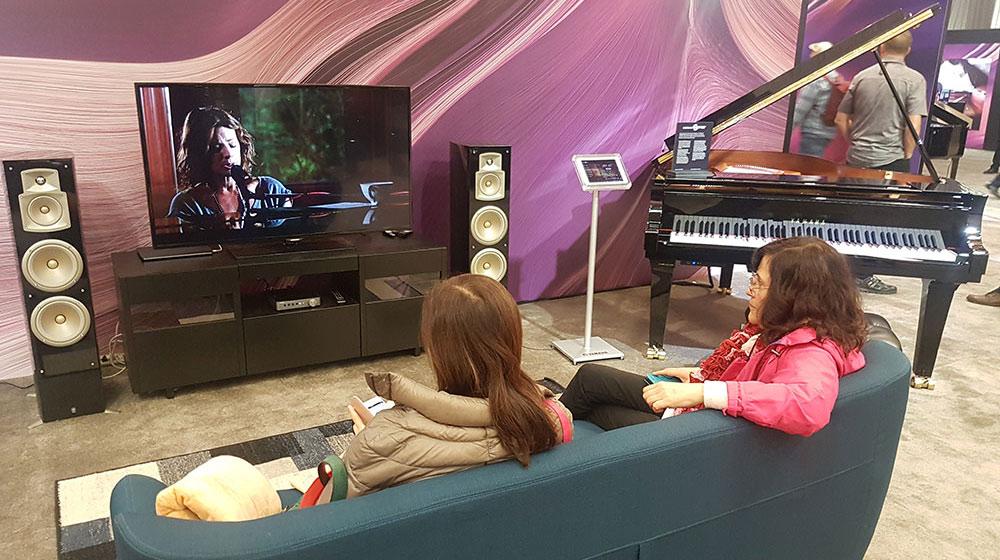 In technology, Schimmel unveiled their German-made silent piano. It contains a sleek slide-out display under the keyboard where you can select one of a handful of nicely sampled pianos. Kawai released their newest in hybrid pianos. They now have both acoustic hybrid (traditional piano with hybrid option) and stand-alone hybrid (no-strings) that both have transducers reproducing tone on a soundboard. You can read more about hybrids on Piano Price Point. 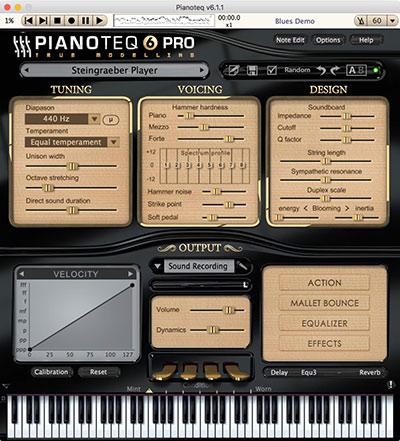 Yamaha continues on the path of full integration of concert experience combined with their player Disklavier pianos. Many are still unaware that you can have a front row ticket to concert events in your living room. While the concert is playing, you can see it on screen and simultaneously have the Disklavier piano play the notes from the performer. (pictured above). Steingraeber revealed their transducer and Pianoteq physically modelled E272 sound. Modartt, who makes Pianoteq software has taken a different approach for capturing acoustic piano sound. Rather than recording the sound (called sampling), they mathematically compute sound via digital ‘fingerprint’ (called physical modelling).  Once the Steingraeber E272 concert grand was modelled, it then allows the user to customize playing experience by altering  timbre, by adding different room ambience or even apply historic tunings. Hailun Piano displayed their piano keyboards for small hands. I’ve never had the opportunity to play one of these before and I found out that there’s an entire community committed to narrower keyboards to facilitate performance for small hands. Rather than making an entirely new piano, the keyboard is simply made narrower and then ‘flared’ on the key stick outward to align with the action parts. (Pictured below). The gold blocks on either end of the keyboard show how wide a standard keyboard would be. 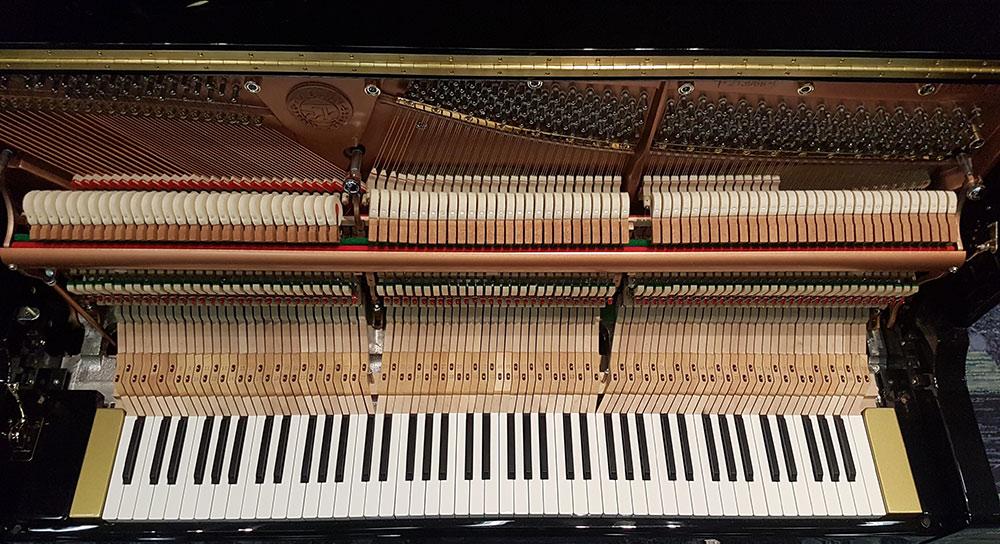 While Baldwin introduced 2 new entry level grands into the mix, Mason & Hamlin added 2 entire lines of pianos called the Artist and Concert level pianos. It must’ve been a busy year at Mason and Hamlin because in addition to the 2 lines of pianos, they also unveiled their new concert grand which was spectacular to play.

Those are the highlights I observed from this show. It was well attended at the Convention Center in Anaheim, California with 115,000 visitors from 130 countries and regions. It’s incredibly interesting to see and play pianos from around the world, side by side in one location. Congrats to all of these manufacturers who put in time and effort to make this show come alive. It’s a wonderful thing to see the progression in piano manufacturing and in doing so, enhance creativity and enjoyment in music.
Piano Brands Represented (Alphabetical Order): Baldwin, Bluthner, Bechstein, Bösendorfer, Blüthner, Brodmann, Fazioli, Geyer, Haessler, Hailun, Hallet Davis, Harrodser, Hoffmann, Irmler, Kawai, Kayserburg, Krause, Mason & Hamlin, Pearl River, Perzina, Ritmuller, Samick, Schimmel, Schulz, Schulze Pollmann, Schumann, Seiler, Shigeru Kawai, Steinway, Steinberg, Steingraeber, Wendyl & Lung, Yamaha, Zimmermann