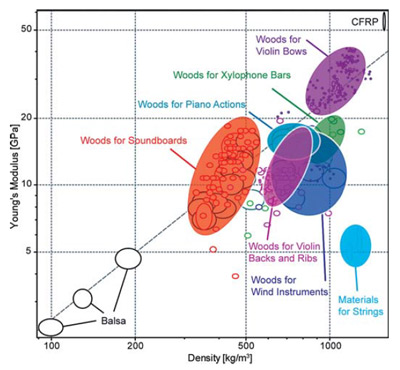 The soundboard of a piano ~ to the naked eye, it looks like a giant sheet of wood located under the strings. To piano makers, this is one of the most critical elements of science in the instrument. Why? The job of the soundboard is to transform tone of the vibrating piano strings into audible waves which also color the tone. Truly, it is inseparable from the voice of the piano. Doing some light reading 😀 (Wood for Sound by Wegst, 2006, American Journal of Botany) it becomes apparent that soundboards are this careful balance of elasticity and stiffness or rigidity. In the diagram, it reveals that there is a correlation between density of wood and elasticity (Young’s Modulus). Generally the lower the density, the greater the vibrational properties. Balancing this concept is stiffness required to resist what is called the down bearing of the strings – the pressure of piano strings pressing down on the soundboard. So the soundboard makeup is this marriage between rigidity (resistance) to pressure while maintaining elasticity for vibration allowing optimal dynamic range and sound radiation. 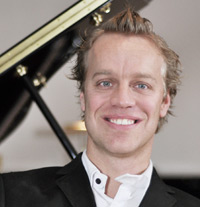 What then makes for a good soundboard? We thought it would be appropriate to go to the source. Bolduc, one of the few independent piano soundboard makers in the world allowed us a glimpse at what is involved in the making of a soundboard. Situated in bucolic Quebec, Canada, they supply both to piano makers as well as independent piano rebuilders. So without further, adieu, let’s talk to Christian Bolduc, factory superintendent. Glen Barkman: Tone wood – why white spruce? Is it structural, is it the density or mass? What makes it ideal for piano soundboards? Christian Bolduc: The North American White spruce has been used for over a century for the making of piano soundboards, as well as violins and other stringed instruments. It has proven its outstanding tonal properties with the most prestigious North-American piano manufacturers. The cold and vigorous North American climate contributes to the strength of the spruce which offers appropriate structure and elasticity required for making a good and resistant soundboard.

GB: When choosing a great log for tonal purposes, what characteristics are you looking for when you view a log in its natural state? Ie. What diameter, length, areas without branches, bark etc. CB: We need the nicest spruce logs available for making piano soundboards. Most of the time, we use only the base of the tree and cut just under the first branches. The length of the logs we use can vary from 2.5 meters long up to 5 meters (8-16 ft). The tree needs to have grown slowly, gradually, without any twisting, blue marks or other impurities. After having selected the best logs, only 20 to 25% of the tree will be selected for making a 1st grade grand piano soundboard. The rest of the wood will be used for making upright soundboards because the colour is less important because they face the wall. The remaining wood can also be used for other products such as house mouldings and lumber. 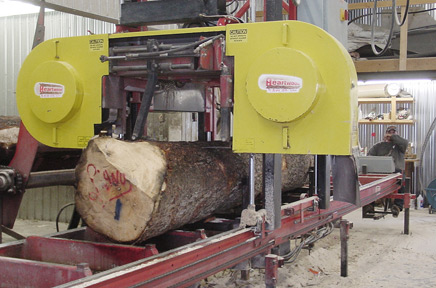 GB:Do you happen to know usually how old the trees are when they are logged and when it is the best time to harvest these trees and why? CB:The tree needs to be cut in the winter time to prevent any sap that would affect the stability of the wood. We need at least 15” diameter at the small end of the log in order to be able to make the quarter-sawn cut. Most of the time, the trees are at least 100 years old. GB:Do different types of spruce or other woods exhibit different fundamentals in the piano as well as overtones? CB:There have been many experiments made by piano manufacturers in the last century using different species of woods for soundboards. The spruce tree is definitely the best material as far as tone is concerned. 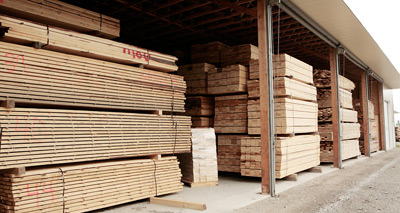 GB: What is the rough timeline from logging to soundboard? Logging, drying, cutting, curing, shaping, sanding… CB: The spruce needs to be cured slowly before moving into production. The most important criteria is that the tree needs to be cut during the winter time when moisture is at its lowest. The logs will first be cut into lumber at our saw-mill and stacked outside for months for a slow drying process. The wood will then be kiln dried a few weeks and stacked again for many additional months. The spruce is at least a year old when we start making the soundboard panels. 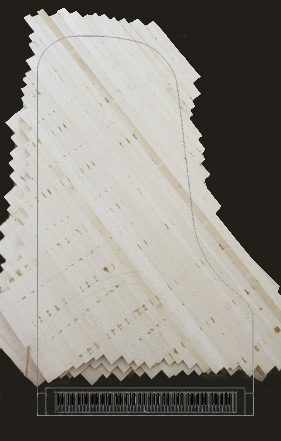 GB: What is the ideal “curing” humidity or moisture content in the wood? CB: The soundboard will need different drying periods during the process of production. In the final step, while gluing it into the piano, the soundboard can reach as low as 4-5% humidity content. GB: Are soundboards planed and then sanded or rough cut and then thickness sanded? CB: The spruce lumber is cut into oversized planks. The pieces are color and grain matched and then glued together. The soundboards are sanded to their final thickness in a 74″ wide abrasive wood planer. GB: Do you customize pianos for specific companies and how do you go about doing that? CB: We manufacture all types of soundboards based on the piano manufacturers’ specifications. Thickness, shape and grain alignment vary from one piano to the other. 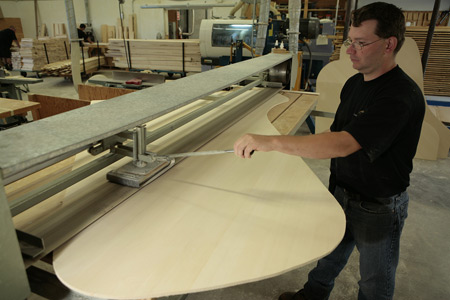 GB: How thick on average is a piano soundboard? CB: A regular piano soundboard can vary from ¼”(6.5mm) for a small model up to 3/8”(9.5mm) for a concert grand piano. GB: Why quarter sawn? Why vertical grain? CB: The main reasons are for stability, strength and sound transmission. The soundboard is firmly glued into the piano but still needs to expand and retract without splitting, depending on the ambient conditions and humidity variations. Maintaining the annual rings in a vertical position guarantees that the wood will change dimensions without cracking. The quarter sawn cut makes it also stronger to support the downward force applied to the soundboard by the strings which can reach over 600lbs.

GB: What is the purpose of ribs to a soundboard? How do you incorporate crown (slight arc) into your soundboards? CB: The ribs help maintain the crown of the soundboard and also counterbalance for the down force exercised by the strings. The ribs can be pre-shaped to match the crown or glued under tension in a press. 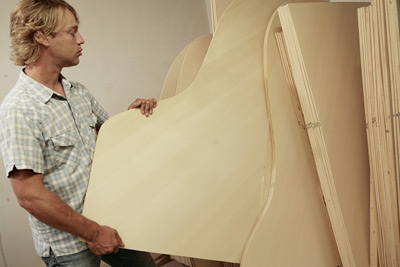 GB: What types of glues hold the planks together? CB: Most manufacturers from the 19th and 20th centuries have been using the hot-hide glue for gluing soundboard panels, pinblocks, veneers, etc. The hot-hide glue was not only good to fix the parts together but also a very good sound transmitter. Today, we use a glue which was developed with the same philosophy of “sound transmission” as it becomes as hard as glass but with a superior resistance to any type of environment. GB: Obviously with 19 tons of string tension on a piano bearing down onto a soundboard, the soundboard needs to be stable enough to withstand that pressure. Do you measure clamping pressure when joining planks or have other measurements to determine adhesion and subsequent rigidity and stiffness? CB: The glue used for laminating the soundboard panels is actually stronger than the wood itself. We may think having maximum force is better, but too much pressure with the clamps is not good. There must still be room left for the glue itself. GB: Are soundboards finished with resins or lacquers or left in their natural state? Or are they finished by the piano manufacturers who purchase them? CB: The finishing of the soundboard is done by the manufacturer after its installation into the piano. The soundboard needs to be lacquered in order to seal and protect the wood.’’ GB:How is the soundboard adhered to the inner rim of the piano? The soundboard is glued to the inner rim as a flat glue joint. There are notches in the inner rim to allow room for the ends of the ribs to fit within.’’

I just want to express my thanks to everyone at Pianos Bolduc for answering questions and also supplying most of the images. Due to the wasteful nature of quarter sawn lumber, it makes me happy to see that Bolduc is also concerned with the environment and not letting any scraps go to waste. They only work with suppliers involved in reforestation. The shorter pieces unusable for pianos are sold to guitar luthiers and the sawdust is used by local farmers for litter while the bark for heating sugar shacks and cottages. Excellent! For more information about Bolduc, visit their beautifully designed website. There’s lots more information on their company, soundboards and pinblocks as well as an array of tools that they also sell. One final note ~ if you’re anything like me, you’re curious as to their inscription on their logo “Je veux, Je peux”. Translated from French it literally reads “I want, I can” and the insinuation is that we can really make things happen if the desire is strong enough to succeed. Congrats to Bolduc for nearly 40 years of this pursuit!

Definition: Secession - se·ces·sion /səˈseSHən/- to withdraw formally from an alliance, federation, or association, as from a political union, a religious organization, etc. This definition of Secession piqued my curiosity as I had recently viewed the Bösendorfer piano with the same name. It’s based on this very famous building in Vienna, Austria. Why Secession? What was the need to withdraw from an organization? I dug a little deeper. In Vienna, Austria, during the 1860’s, there ...
Read More

I suspect in the year 2020, we’re going to be hearing a lot of the phrase “Hindsight is 20/20”. Looking back on the last decade, a lot has changed in the world of piano manufacturing since I started attending the NAMM show (National Association of Music Merchants). While many could argue that pianos don’t really change from year to year, if you pay attention, you’ll find that they’ve changed drastically this last decade. Parts have ...
Read More

What is a House Brand Piano?

If I would ask you to name 20 brands of pianos, how would you answer? Could you name 5 or possibly 10? Maybe you can easily name 20. Historically there are approximately twelve thousand brands of pianos! It is entirely possible to encounter brands that you’ve never heard of before. I’ve been in the piano business for several decades and I am still surprised by the number of piano brands that I’ve never encountered. House ...
Read More

Inside the Steinway Vault

Have you heard of the Steinway Vault? Deep in the basement of the factory in New York City, the Vault houses just a handful of precious pianos worth between $200,000 and $2,500,000! But you won’t be seeing these on the next public tour. The Vault is only accessible by biometric fingerprint to 4 people at the Steinway factory. What makes these pianos so valuable? They are all situated there for different reasons: Lang Lang, the ...
Read More

Are Hybrid Pianos the Next New Thing?

I hear a lot of talk about hybrid pianos being the next new thing and yet I believe there’s some confusion as to what a hybrid piano actually is and whether or not it can be used as a piano alternative in serious education. When we see hybrid cars driving about, from what we’ve seen in the media, it refers to an alternate power source providing some advantage in energy. While there are several kinds ...
Read More

Pearl River Piano Group has grown to be the largest piano manufacturer in the world, producing more than 400 pianos per day with an annual production of 140,000 pianos. “Where do all of these pianos go?”, one might ask. Pearl River Piano dominates the Chinese piano market with an estimated 40% of the local market share. When you think about the population of China at a billion people, even 140,000 pianos represent but a fraction ...
Read More