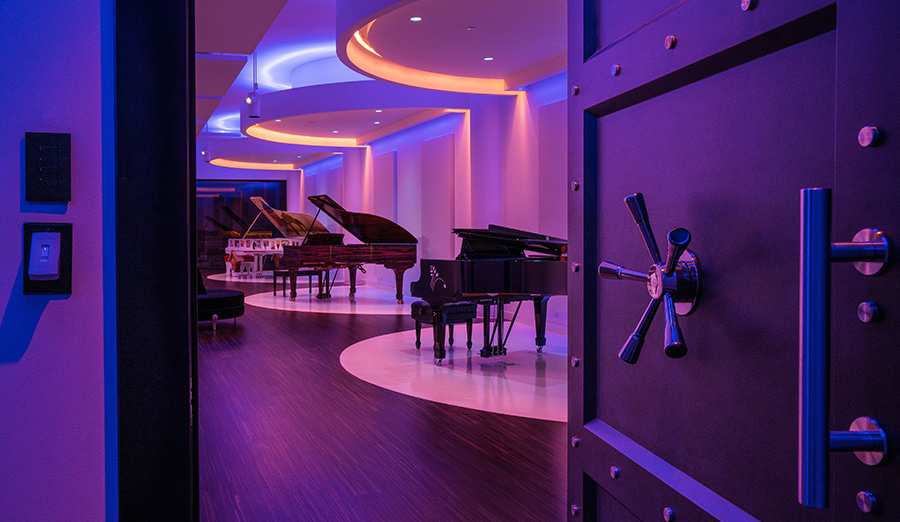 Have you heard of the Steinway Vault? Deep in the basement of the factory in New York City, the Vault houses just a handful of precious pianos worth between $200,000 and $2,500,000! But you won’t be seeing these on the next public tour. The Vault is only accessible by biometric fingerprint to 4 people at the Steinway factory.

What makes these pianos so valuable? They are all situated there for different reasons: Lang Lang, the famous Classical pianist, is one of the few artists who has worked in conjunction with Dakota Jackson (furniture designer) and Steinway artists to develop the Black Diamond edition piano that bears his name. 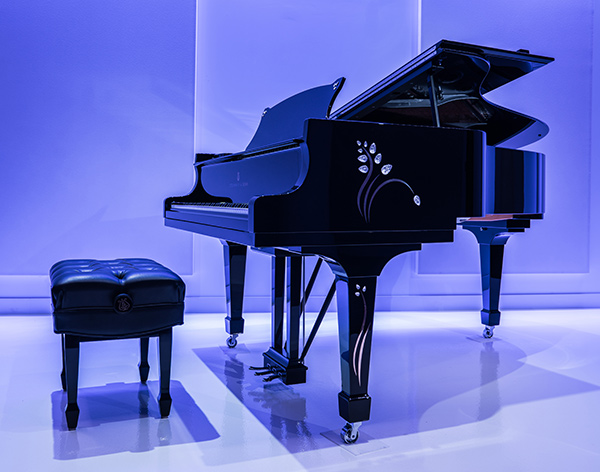 Another of the pianos located in the Vault is the Heliconia piano which features inlays from famed glass maker Lalique. Lalique, established in 1888 has produced some of the most luxurious vases and artistic centerpieces in the last century. Teaming up with Steinway, they produced both a white and black version incorporating custom glass pieces for these special edition pianos.

What’s the most popular piano song ever written? I’m sure that depending on your taste that there are several answers to this. But without question, John Lennon’s Imagine would be named in the top 5. Paying tribute to this artist, Steinway developed a piano modelled after the one Lennon gave to Yoko Ono on her birthday in 1971. This piano features artwork by John Lennon and snippets of the sheet music on the piano frame as well as his signature. A portion of the proceeds of the sale of the Imagine piano go to John Lennon Educational tour bus, a non-profit mobile recording studio.

The Vault is not only an elaborate showroom, it also is temperature and humidity controlled, acoustically treated, well-lit preview space for interested clients. It effectively creates a vignette to capture the best lighting and space for each of the pianos. 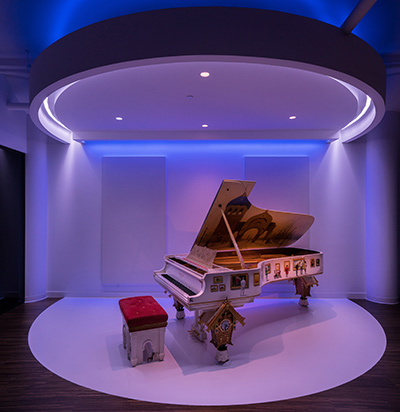 The most stunningly detailed piano of the room is “Pictures at an Exhibition”, named after the Russian composer, Mussorgksy. About a decade after Steinway had its humble beginnings in 1853, composer Mussorgsky first met Viktor Hartmann, an artist, architect and designer. Both men were devoted to Russian art and soon became friends. Hartmann gave 2 paintings to Mussorgsky and they gained appreciation for each others’ careers. What shook Mussorgsky was Hartmann’s sudden death with a brain aneurysm in 1873. A common friend, Stasov mounted a memorial exhibition of over 400 works of Hartmann, including the 2 given to Mussorgsky. Mussorgksy’s contribution and grieving came through music. In 1874, he wrote and dedicated a 10-work suite for his friend entitled “Pictures at an Exhibition”, which has become one of the most iconic musical works ever written. Sadly, most of the paintings from the exhibition have been lost and scattered over the years on which Mussorgsky’s suite were written.

Pictures at an Exhibition Steinway grand is more than just a piano. It is symbolic of a friendship between composer and painter, a connection of sound and sight. Commissioned painter, Paul Wyse tells of the making of this elaborate piano. If you have a moment, the video below is well worth the time: 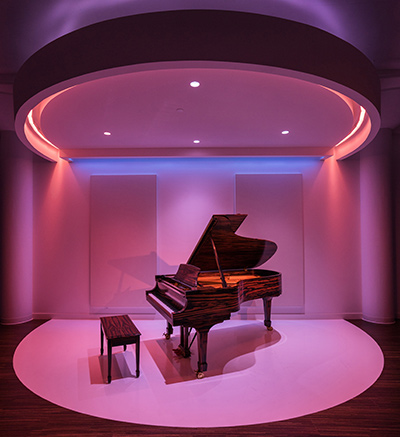 Fascinating to me is the glazing process where the layers of paint become like stained glass with the light of the white grand shining through from behind creating an almost optical illusion through the variation in depth perspective. The legs of the grand piano are a symbolic representation from one of the pictures in the exhibit of a Russian clock entitled “The hut of Baba-Yaga on hen’s legs”. This piece stands as a legacy of art and has become a centerpiece attraction in the vault and is valued at 2.5 million.

But there are 2 other unassuming pianos in the vault. One that speaks to me because of my love for mid-century modern furniture. It’s a recreation of Teague design from the 100th anniversary of Steinway. Subtle, understated and beautiful.

The other (pictured left) is compelling to talk about because it is made from one piece of wood, one plank called a “flitch” of rare and exotic Santos rosewood from East India. I love the idea of one large tree book-matched and made into a beautiful Steinway grand.

These pianos represent some of the jewels of Steinway and appropriately are housed in the Vault. Interested in purchasing one? They all are limited editions and you can speak with your local Steinway dealer to deliver you an invitation.

I would like to say a special thanks to Steinway for sharing their artwork and making this article possible.