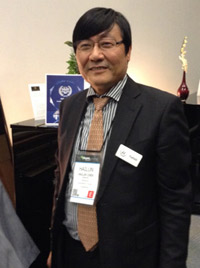 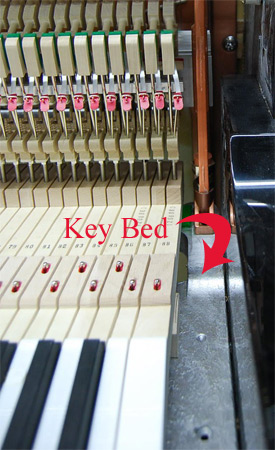 Earlier this year at NAMM I interacted with Mr. Hailun Chen – truly a privilege and honour to connect with such a humble visionary who has influenced and supplied more piano parts than we’re probably aware of. I greatly respect individuals who state “I have put my name on my pianos and on my company”. Mr. Hailun Chen is the real McCoy where his name is his guarantee.

Working with a translator, he showed me different concepts in his pianos. What caught my eye was this silver looking gleam under the keys on one of their upright pianos. As seen in the picture, the key “bed” is the horizontal frame that the keys rest on. It’s imperative to have a solid key bed without which the piano touch would be compromised in evenness and functionality. Normally made out of wood, frames will sag or warp over time. It’s a common problem. 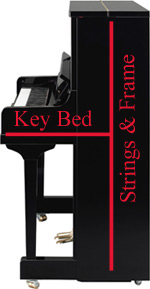 Aluminum however, prevents this problem and ensures both structural integrity but also alignment for a life-time. It is completely warp resistant. So if the strings run vertically in an upright piano, the key bed is perpendicular to the frame. If there is any sagging or warping in a wooden key bed, even by a few millimetres (1/16th of an inch), the problem is compounded in the vertical alignment of the strings.

So what are the implications of integrating aluminum? (See? I knew you would be as excited about this innovation as I am. This innovation BTW is exclusive to Hailun pianos and is officially called PAS system – Permanency- Accuracy- Stability). 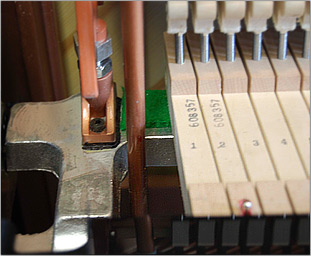 Well to keep any piano completely in ‘check’ and performing optimally, regulation (fine adjustments) are done. Quite often, as pianos age and get worn, piano technicians are making these adjustments to compensate for worn parts but also for a sagging key bed. What happens then if key bed issues were taken out of the equation? Indeed, the regulation would be a much easier task. Speaking with Basilios Strmec, CEO of Hailun Distribution for North America, it gets even better. Let’s say you are an avid pianist working hard on a performance degree and you used one of the Hailun pianos as a workhorse. You would expect to see substantial wear and tear, correct? Over years, when pianos start to feel and sound worn, if you had an aluminum key bed, you could simply swap actions and renew the instrument to its original condition. 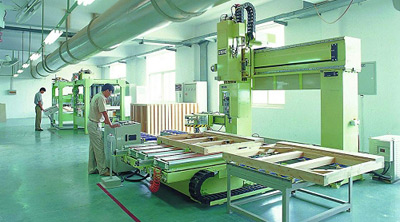 That means in essence you would have a mechanically NEW piano – with new joints, hammers and parts. It would feel new but also the fresh felt on the hammers would make it sound new. Historically during construction of a piano, one instrument’s parts were fitted to just one piano – meaning they’re not interchangeable. 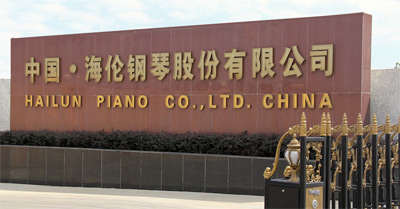 Even if it’s the same make, same model, same brand, same year, you would usually not be able to change out parts readily. With modern computer based CNC (Computer Numerically Controlled – in other words carving out parts by computer control), the precision is such that you could actually swap out the ‘engine’ of the piano with 4 bolts in a few minutes. In essence then, we’ve reached an age in manufacturing where not only are you investing in the present piano but saving on the rebuilding costs for years to come. That’s amazing! Kudos to Hailun for the innovation in the industry. Special thanks to Basilios Strmec for taking the time to discuss this with me and providing information. 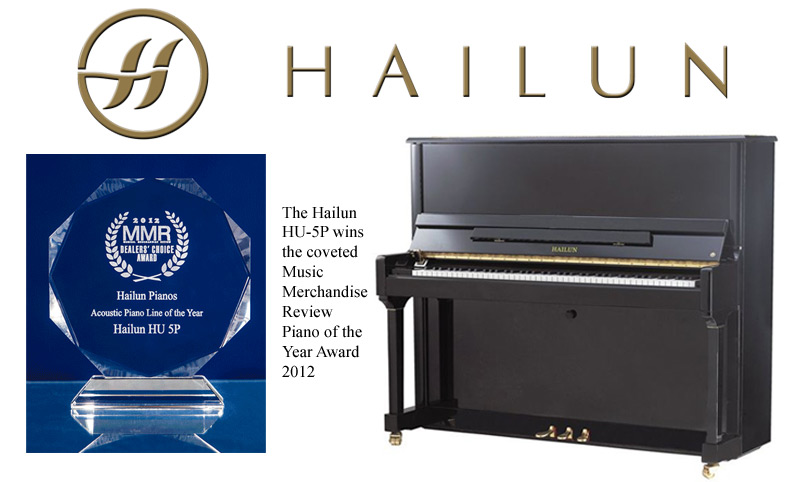 Haven’t heard of Hailun? They have over 430,000 square feet of manufacturing space and employ over 1,100 people and one of only 2 Chinese made piano companies listed on the Shenzhen stock exchange.