They appear in every city ~ tall old upright pianos from yesteryear. They seem massive compared to today’s standard. In fact, it would be an anomaly to find small pianos that were made before 1930. Why? For 2 reasons: First, the technology of making small piano actions was not widely developed; and second, there seemed to be this idea of making elaborate and spectacular cabinets with grand-like tones. The only way to accomplish that was through the use of long strings and a large soundboard necessitating a taller piano. 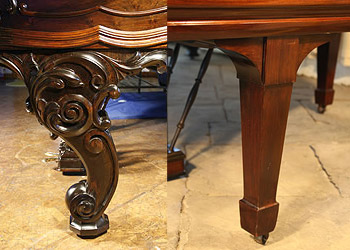 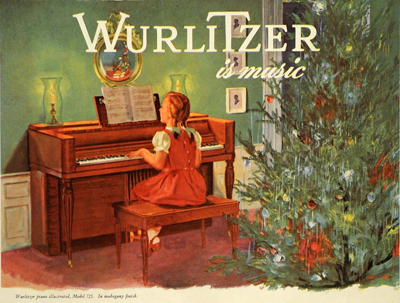 The wheels of trends move slowly in pianos. From a cosmetic perspective, it took nearly 75 years for elaborately carved pianos (circa 1850) to turn the corner to have more simple lines (circa 1920). In fact, I’ve seen many pianos in my lifetime where ornately carved grand and upright legs have been swapped out for modern square legs. Why? Fanciful detail simply fell out of vogue by the 1920’s. You didn’t want to be seen with intricate woodworking on a piano. By the end of the Second World War and into the 1950’s and 60’s, making pianos ‘compact and convenient’ became the mandate. Having a ‘big old upright’ became unfashionable. At the same time, rising labour costs gave way to efficient manufacturing and attention to detail was replaced by utilitarian designs. There weren’t many embellishments or carvings to speak of. Finishing resins also began in the late 60’s and early 70’s to usher in an era of black glossy pianos. Pianos kept declining in height until the industry hit a new low of 36” tall pianos – called drop action pianos, where the actions of pianos were recessed inside the body of the piano. For anyone who has worked on these, you’ll know exactly how difficult they were to service. It was near this time that something switched – something that would affect the piano industry forever.

I remember pulling it out of the box in 1981. My brother, who was a local rock musician and eventually became a television, movie and IMAX composer, bought one of the first digital keyboards in the city. Being almost a decade younger than him, he invited me over to his house for the unveiling and we plugged in this Yamaha DX7 for the first time to listen to sounds that we had never heard before. We look back now and have a good laugh but it was the inception of the digital era. By late 80’s and 90’s digital pianos and keyboards became the new experiment for parents with budding musicians. “Let’s just buy this $299 keyboard for the kids and see what happens”. 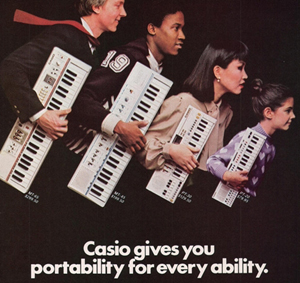 Having lived on the sales floor during this time, I’ve heard that line more times than I can remember. As the digital age emerged, some people argued that these would NEVER replace acoustic pianos. And they were correct. However, that is not to say that digital pianos and keyboards didn’t alter the industry. With time and technology, digital pianos have become more authentic sounding and feeling. So have they finally become a replacement? Well, that depends on your expectation. If you’re used to the subtleties of felt striking strings, and the nuances and shading of color in music, as well as the ability to truly ‘feel’ sound then the answer is no. If you want portability, decent tone, volume control with no maintenance, they might be the solution you’re looking for. (Just a plug for my friends who are piano technicians… when people tell me excitedly that they don’t need to tune their digital pianos in order to save money, I’m quick to remind them that what they save in maintenance they heavily lose in depreciation of electronics but that’s another story).

The bigger question however is “How has the electronic age affected the present day piano industry?” Well it’s time for some big broad brush strokes – ones that create generalities but also may shed some light on what is up and coming in the world of piano sales for the future.

1. Christmas is over. I remember hearing of stories (before my time unfortunately) when piano store owners would relish the fall season. It was a time when all of the new upstart piano students would come in to purchase a piano. It was like Christmas! With no other options (pre-keyboard era), parents were forced to look at only traditional pianos. Quite often, the lion’s share of the yearly sales in a retail outlet happened in the fall season. This has now been replaced largely with a 2-step process of either the purchase of a portable keyboard or a used piano followed at some point with a more ‘serious instrument’. Unfortunately in my opinion, many children never learn to fall in love with the tone of a real piano if their first experience is an unweighted, 61 key keyboard that vaguely resembles the sound of a piano. Many also quit the piano before the real instrument is ever purchased and implemented.
2. Price points have changed. Digital pianos touted as the ‘new technology’ have all but plummeted in price. What used to sell for $2,000-$5,000 is now roughly available for $600-$2,000.
3. Entrance of hybrid pianos. What’s a hybrid? It’s a digital piano with a real action. Advantages: a real touch of a piano, portability and no maintenance. Disadvantages: digital tone, longevity of electronics is unknown. The hybrid pianos albeit a great step in the world as far as technology is concerned are hitting the price point of yesterday’s digital pianos $2,000 – $5,000.
4. Digital pianos mainly create tone by replaying recordings of real concert grand pianos. So when you play a note on the keyboard, the digital piano plays the appropriate recorded note at the appropriate volume. But if digital piano tone is a recording of a concert grand, why would consumers upgrade to a small sounding real piano as the next step up? They wouldn’t. If they’re upgrading, the trends are towards bigger sounding acoustic instruments. 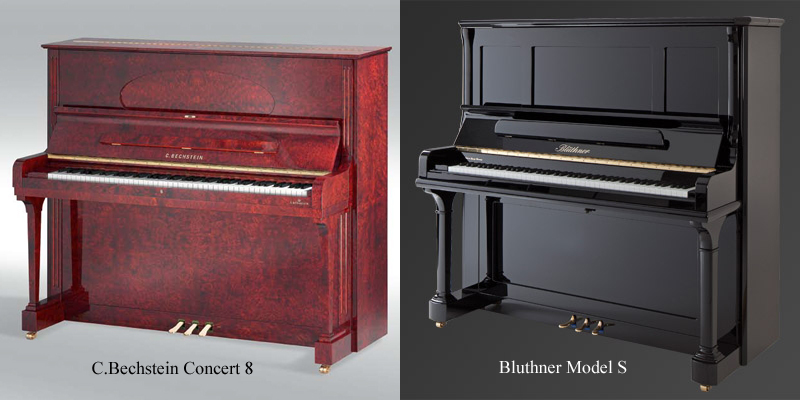 Conclusions: Used pianos and electronics have shored up many of the sales of pianos below $3,000. Consumers buying new acoustic traditional pianos are looking to upgrade into something better and so they’re starting to shop bigger. The challenge is to hit the price ratio for today’s economy. The chapter in Piano Price Point that has surprised me over the last 5 years is Upright Piano Chapter 5 ~ pianos priced between $7,000 – $9,000. It’s the largest chapter within Piano Price Point. The prices reflected are Manufacturer’s Suggested Retail Prices (MSRP) which are often inflated by up to 1/3 of what you would find in local stores. This means then that new piano sales are targeting somewhere between $4,500 – $6,000, consistent with the report published by NAMM this year (read about it in our Piano Market Trends article from November 2014). And if you scroll through the pianos in Chapter 5, take a look at the sizes. They’re averaging 48” tall. Shoppers are moving back to the fact that bigger is better. Also, the cabinetry details are also becoming more significant. Two-tone wood with gloss black are coming of age as well as decorative veneers of exotic woods such as bubinga, macassar and even simple cherry or mahogany. It appears that the cosmetics of pianos are getting a bit of a makeover and the manufacturers are moving towards larger instruments. The giants are once again emerging. 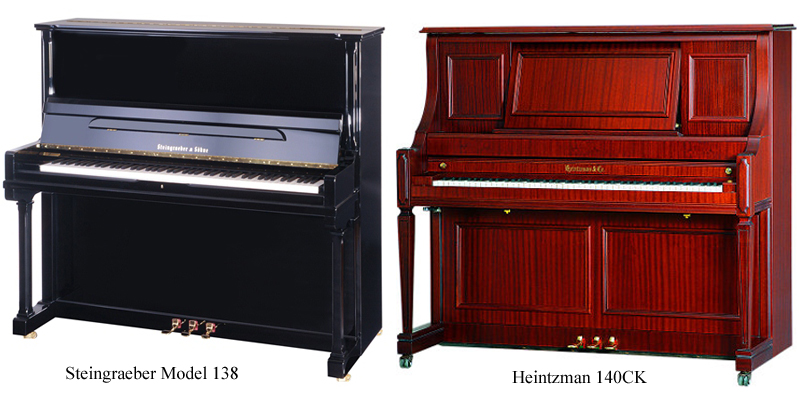 To end, I’d like to point out that there are a few manufacturers moving back towards 138cm or 55” tall pianos (Steingraeber, Bechstein, Bluthner and Heintzman to name a few) and tell of a recent incident that sparked this article. Through a series of events, an old Ronisch piano (still being made today by Bluthner) became available locally. Being the curious sort, I had to go take a look. It was not a 52” tall piano – standard height for tall piano manufacturing today. No, it wasn’t even 55” tall… it was a whopping 58” tall (145cm)!! I had to acquire it mainly for the reason that I’ve never seen an upright piano this large (pictured at the top of this article). To be honest, I don’t even know what I’m doing with it yet because it’s sitting in my hall. When I pass by, I quite often play the lowest notes – sounds that I’ve never encountered on a large upright piano. Finished in burled walnut, this forgotten treasure of yesteryear is an example of how piano makers (this one from 1885) desired to make a grand sound in upright form. As consumers are looking once again for timeless heirlooms and pianos that truly inspire through beautiful cabinetry, amazing tone and responsive touch, I believe that the industry may move back to 55” tall pianos as part of the repertoire of piano making in the future and discontinue smaller instruments. The piano industry is quickly becoming a niche market and makers are just now feeling the effects of 150 years of trends coming full circle.