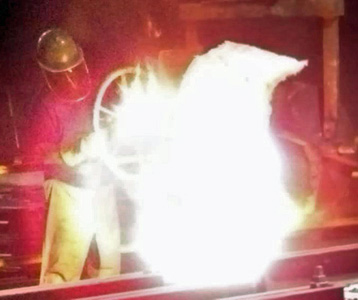 Every piano has one. It is the backbone to structural integrity. It’s also what gives a piano most of its weight. What is it? Commonly called the frame, harp or plate, this iron mass in the piano withstands the 19+ tons of string tension.While iron reinforcement pieces were introduced into the piano by the year 1799, it wasn’t until 1825 that a full cast iron frame was patented by a man named Alpheus Babcock (The Piano: An Encyclopedia. Palmieri). All of the piano manufacturing world then saw the great advantage of the implementation of iron, and have incorporated iron frames into their instruments ever since. The addition of metal to the piano all of a sudden meant that the string design could have greater tension, making the resonance, far greater and the power, magnified. It is this frame that turned the page away from predeccesors of harpsichords and clavichords and established the piano more akin to the instrument we know today. It also meant that tuning stability was finally possible.

I’ve been wanting to feature cast iron making in the piano for some time and found that Doug Atkins (Registered Piano Technician from Dayton, Ohio) had visited the OS Kelly Foundry in Springfield, Ohio where they cast Steinway, Grotrian and Charles Walter piano plates. His photo tour was perfect and he has graciously allowed us to use these pictures. Shown above is exciting process of pouring molten iron to form a piano frame. But before we get to that, let’s step back and take a look at how this method of sand casting works.

To begin with, it is helpful to understand the basics process of casting. In its simplest form, casting starts with a pattern, a master template to be reproduced in metal. The pattern can be made from anything ~ wood, styrofoam, plaster ~ anything that can be carved to make the shape that is desired. While there are 2 major types of casting processes for pianos (sand cast and vacuum processed), we are going to examine green sand casting (also known as wet sand casting). After the desired shape has been made, it is then pressed into the sand to make a mold. Once the pattern has been removed from the sand, the negative imprint remains. The compressed sand form impression is filled with molten iron and within seconds, the mold cavity is filled. The iron cools, the sand is broken away and reclaimed, leaving behind the iron shape, the exact representation in metal.

If you’re interested in casting on a small scale, here are 2 excellent explanatory videos seeing this process in action (Sand Casting Tutorial & Aluminum Sign Casting). They walk through everything from filling forms to pressing sand and show the iron being poured into the forms. They are an excellent resource in understanding the finer details of casting. 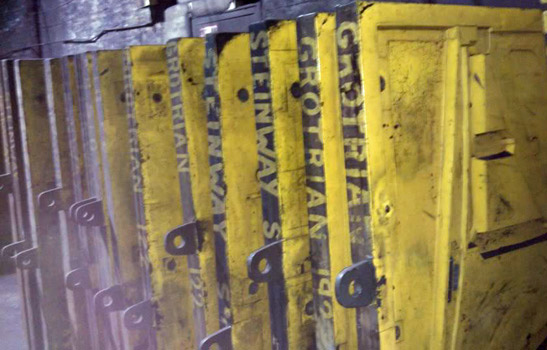 At the OS Kelly Foundry (now owned by Steinway), casting piano frames happens on a much larger production scale. They’re not casting small pieces but frames that weigh hundreds of pounds.

Like books on a shelf, the cast iron molds stand vertically in a row; each one, a pattern to become the next iron frame of a piano. Notice both the brand and model for each model are written on the side of the template. These are life size patterns that stand sometimes greater than 6 feet tall.

The Model: Echoing the aforementioned process, all casting starts with a master model. Shown (right) is a model of a grand piano ready to be pressed into the sand.
The Impression: Pressing the cast into the sand. Pictured are the detailed lines left in the sand of an upright piano after removing the model. Each of those lines will become a supportive bar in the frame of the piano. Details such as lettering and decorative elements will also transfer effectively from the master model to the sand. Pictured below is the a 30 second clip of the moment when they pour the molten iron into the mold
. 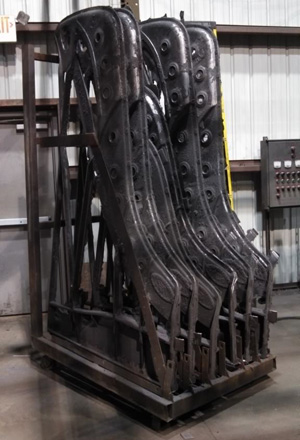 Casting: Pouring the molten iron into the mold, the frames quickly fill the cavity and harden. After cooling, the sand is then removed from the form.Finishing: Cooled and cleaned, the frames are ready for sanding, finishing and spraying. Extensive time must be taken to process each frame, making it ready for the piano. CNC (Computer controlled lathes) are often used by larger companies after casting to more accurately smooth out the details of the plate and with precision, accurately process each frame to be uniform. Once the grinding and sanding have been completed, the piano plate is then painted with primer. Traditionally, the frames are sprayed in bronze powder mixed with lacquer, gold metallic paint or
occasionally silver and then clear coated to appear smooth as glass. Pictured is a cast iron frame installed inside the rim of the grand piano.

Thanks again to Doug Atkins for supplying pictures from his tour. If you want to see the entire tour, click HERE. There are over 100 photos and videos to look at more closely. Enjoy.