There’s a church in Dresden called Frauenkirche (translated “Church of our Lady”) which was bombed on February 15th, 1945 during WWII. The church sat in ruins for 50 years until the reunification of Germany. But in 1989, a 14 member group under the leadership of a musician named Ludwig Güttler formed the Citizen’s Initiative for the reconstruction of the church. This grew into more than 5000 members, spanning more than 20 countries. The church was finally completed in 2005 and stands as a memorial to the world as a collaborative project of art, archaeology, faith and unification.

One of the teams involved in some of the more detailed aspects of carvings within the church were employed recently by Bechstein in a spectacular million dollar piano reproduction of another kind. In 1886, Bechstein had made a one-of-a-kind piano for an exhibition in London called the Sphinx. Similar to the story of the Dresden church where the reproduction was based on photographs, all that remained of the Bechstein instrument was a single image. Bechstein decided to remake a present day version of this 130 year old original.

The features of the grand are similar to any world class C.Bechstein: the cabinet contains the feathered lines of pyramid mahogany, ciresa spruce soundboard, beech and mahogany rim, Renner action and hammers, with a traditional sand-cast iron plate. But what sets apart this piano is the cabinetry finesse involving a process called “lost wax”. This is more specifically where the team from the Frauenkirche comes in. 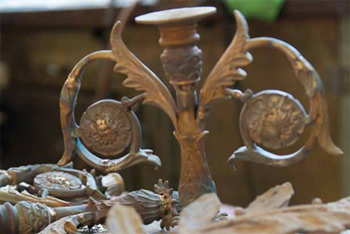 Decorative elements are first carved out of wood and “dry-fit” meaning that they ensure that the parts will fit correctly after they become cast in bronze. The sculptured wooden parts then become the model from which a master mould is made. Wax is used to make models of the various pieces and when the bronze is cast, the wax evaporates through a process called metal-chasing.
The once carved wooden pieces are now identical replications in bronze. But Bechstein didn’t stop here. The pieces were then fire gilded with gold. Once they are heat-treated, the gold pieces turn a dull yellow. The vibrant gold only reappears through polishing by hand and through the use of polishing stones. After 32 months and 1800 work hours later, the Sphinx was unveiled.

Appropriately named, the Sphinx is a Greek mythical creature that represents mystery and wisdom. Truly, this piece by Bechstein reveals their manufacturing prowess, their wisdom of 163 years (est. in 1853) and their ability to continue to amaze the world with their artistic flair.
The Price for this magical piece? 1 Million Euro (Approximately $1.12 million US dollars)
For more information on the piano, you can download the full pdf.
To see the Sphinx being played, watch the video on YouTube.
The full line of C.Bechstein pianos can be viewed on Piano Price Point