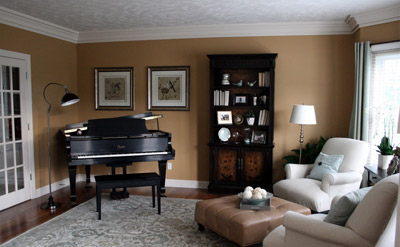 So you just purchased a piano. Now what? It’s kind of like bringing the baby home from the hospital; you need to give some thought as to the inclusion into your life. What about placement? Where do you put it? And how about maintenance? How much and how often does it need to be tuned? This month, we’re taking a brief look at piano follow up in your home.

I’ve quite often said that pianos are like small elephants. As a piece of furniture, they can dominate a room. First off let’s debunk the old ‘outside wall’ business where many have been told pianos cannot sit on the outer wall of a house. Back in the 1920’s, old houses didn’t have sufficient insulation and in winter, outside walls had as much ice on the inside of the wall as the outside. Fluctuations in temperature were enormous and pianos weathered much better on inside walls. This is not really applicable today. General rule of thumb, if you can touch the wall and it feels like room temperature, you most likely don’t have an issue because modern construction and insulating have effectively buffered outside extremities. There are, however things to consider as danger zones: direct sunlight, baseboard heaters and fireplaces. Direct sunlight will not only create fluctuation in temperature and humidity and affect the inner workings of the piano but it will quite often fade and damage the outer finish.

Baseboard heaters are a no-no for close proximity. They heat up and cool down constantly. Finally, being in a confined space with a fireplace or wood stove also dries out parts and the sound board of the piano. If you have an upright piano, don’t position it close to the wall and in doing so ‘cup’ the sound. General principle is to have the piano about a fist’s distance from the wall which ensures proper displacement of the sound. Do also consider acoustics of the sound as well. Hard wood floors will echo while carpet and drapes absorb sound. Plaster and glass contribute to the echo. Grand pianos sound great in corners as the tone reflected off of the lid will be heard as it reflects again in the corner.

What exactly is piano preparation? If all of the notes play and work properly, why do I need to put work into a new instrument? Let’s just say that manufacturing involves assembly and some levels of preparation. Final preparation is the last stage of adjusting a piano to its home environment. Having a piano moved half-way around the world, it has been bumped and jostled. The wood at the factory quite possibly has different humidity levels to your home and so out of the approximately 5000 intricate piano parts, some may be 90% tight but rarely are they 100%. Let me give you a small example: the hammer that strikes the string is attached to a round stick called a shank which rotates via a steel center pin on a small wooden piece called the flange. This flange is screwed into a common rail appropriately called the hammer rail. It’s my experience that if the flange screws are not completely tight, you lose transference of energy and will quite often result in audible clicks even if they are a quarter of a turn off of tight. “Well why would they become loose by simply moving the piano?” It’s not that the screws have undone, it’s that the wood has settled or cured, possibly absorbed or released humidity subsequently resulting in looser parts.
Preparation involves double checks on these screws as well as plate and action screws and the alignment of action parts. Also significant is the ‘seating’ of strings – making sure they are tight against the bridge. Bringing pianos to proper pitch for the first time is also part of that process. Finally, voicing the piano – making it sound brighter or mellower – adjusting the tone so that it is suitable in your home environment is significant.

“So… how often should I have this done?” are usually the words clients say to tuners as they’re putting on their shoes and closing their toolkits. Great question. If you’re a new piano owner, there quite often is abundant stretch in the new steel strings. You wouldn’t think so, but new piano strings will stretch for quite some time. Subsequently, tuning new pianos more frequently in the first year is always beneficial. Usually your first tuning is included with a piano purchase from a retail store. My advice? Tune another 2 times your first year and you will have a very stable instrument long-term. So what happens to strings with stretch? It’s a little like a tug-of-war. You stretch the strings and the strings pull back but not as far (often by about 1/3). You tune again, and again the piano will pull back but not as far. By the third tuning, you should have more consistent pitch. After that how often should you tune the instrument? This varies considerably from location to location and piano to piano (and person to person…lol…some people are just really picky :D) In more drastic climates, where it gets really cold and then quite warm, pianos could be tuned twice a year just following the major changes of ‘freeze’ and ‘thaw’.